Less than six weeks before the elections, the campaign is launched in Israel and the tone has been set. The campaign will be tough. Two significant current events happened these last days and will rule the campaign until the elections: the creation of the Kahol Lavan (Blue White) list and Attorney General Avishai Mandelbit’s decision to indict Benjamin Netanyahu on corruption charges.

On February 21st, deadline of their registration, 47 lists were deposited for the elections, which is an absolute record. Until the last minute, a doubt remained on the various scenarios of possible merging of lists. Only the day before, Benny Gantz, former chief of staff of Tsahal, who recently launched with Moshe (Boogie) Ya’alon, also ex chief of staff, who adopts a rightist position on security and served as Minister of Defense under Netanyahu but who is strongly opposed to him, and Yair Lapid, who is the leader of the centrist party Yesh Atid, have announced the merging of both movements in order to create the list Kahol Lavan (Blue White). Lapid brings as “a wedding present” the structures of a party created seven years ago, which were missing in Gantz’s list. In case they win, it has been officially recorded that Gantz will be Prime Minister for two years and a half, and that Lapid, who will be named Minister of Foreign Affairs, will then replace him until the end of the parliamentary term. Gabi Ashkenazi, a third former Chief of Staff, who seems to have been the architect of that merging, joined them in this new party which, for the first time in years, threatens the hegemony of the Likud on the Israeli political chessboard.

Facing that risk, Netanyahu has put strong pressure—by promising them two ministerial positions, one of which would be Education— in order to convince the parties Habayit Hayehudi (“The Jewish Home”) and Otzma Yehudit (“Jewish Power”) to merge together. This last one has succeeded to “Kach”, the party created by Rabbi Meir Kanana—who was prevented from running for elections by a Knesset vote—, and banned after the mass murder committed in 1994 by Baruch Goldstein in the mosque inside the Cave of the Patriarchs in Hebron. That decision which will allow racist, anti-Arab and homophobic “Kahanist” deputees into the Knesset horrifies many people in Israel and in the Diaspora. JCall, as well as JStreet and many other American Jewish organizations—including AIPAC, the powerful American Jewish lobby traditionally close To the Likud—strongly condemn that decision which goes against the values of tolerance and justice Israel was built on.

The other event has been the indictment of the Prime Minister on bribery, fraud and breach of trust for one of the three corruption cases he is involved in, and on fraud and breach of trust for the other two cases. Which impact will that decision have on the Likud electors ? For the time being, no one knows the answer to that question, but it will certainly determine the results of the elections. Will Netanyahu’s supporters have the self-protective reflex he is trying to call forth, in order to back him up against what he calls “the power of judges and media”? Or, on the contrary, will some of his more legitimistic electors refuse to vote for a candidate who might be charged with corruption at the end of the investigation and decide finally to support the Kahol Lavan list, allowing it to build a minority coalition which could count on the external support of the “Arab parties” ? Before that decision, the polls put the Kahol Lavan list in lead over the Likud (36 mandates against 30) but the right-wing block, with Orthodox parties, was still slightly leading. What will happen after the Prime Minister is indicted ? We will have the answer in the next few days ! 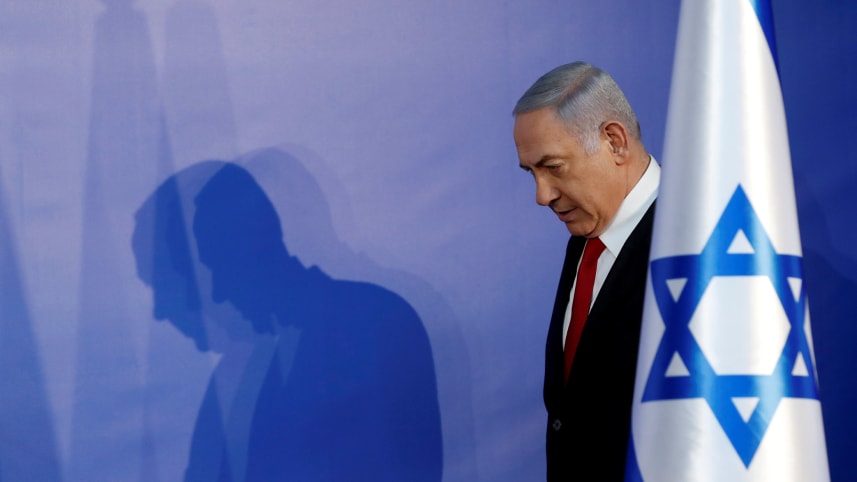 "Kahanists" have no place in the Knesset !